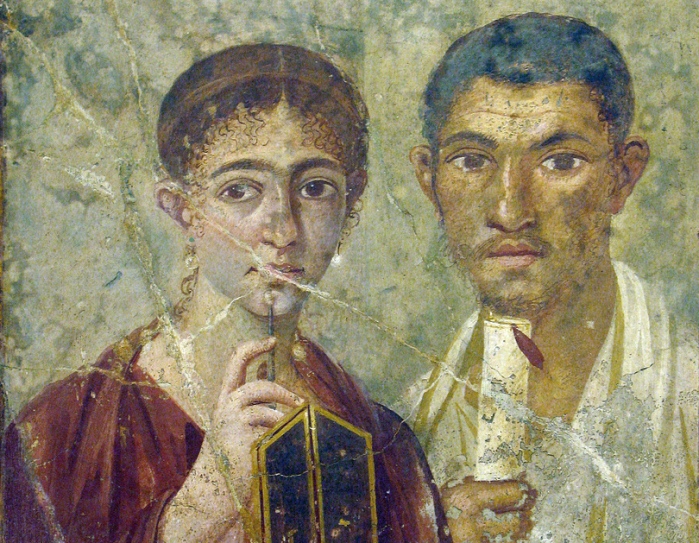 One of the stories I tell in “Writing on the Wall” is about the way the Roman book-trade worked. There were no printing presses, so copying of books, which took the form of multiple papyrus rolls, was done entirely by hand, by scribes, most of whom were slaves. There were no formal publishers either, so Roman authors had to rely on word-of-mouth recommendations and social distribution of their works via their networks of friends and acquaintances.

It was crucial to choose the right person to dedicate the book to. The ideal candidate would be famous, influential and somewhat vain, so that he would be sure to mention the book to his friends, thus ensuring that people heard about it. He would also have an impressive library with plenty of traffic from visiting scholars and philosophers. The new book, prominently displayed in the library as a set of rolls in an elegant presentation box, would then be seen by people who might take pick up a papyrus roll and start reading it. If they were sufficiently impressed, they might ask the library’s owner for their own copy, which he would ask his scribes to produce. So the ideal dedicatee also needed a staff of reliable copyists. With luck, the original copy of the book would then produce offspring which would, in turn, end up in other libraries where they could be consulted and copied. The author might also put a few other copies of his book into circulation, giving them to friends and asking them to read them and pass them on, and make their own copies if they wanted to.

This explains, in part, why Cicero dedicated his book “Academia” to Varro, a scholar and prolific author who had a large and popular library. On another occasion Cicero wrote a rather fawning letter to his well-placed contemporary Quintus Cornificius, asking him to endorse one of his books and recommend it to his friends. But endorsements were not the only way to generate interest in a new book. Cicero’s friend Atticus hosted dinner parties for him, at which excerpts, or sometimes even an entire book, would be read out (“whenever I write anything, I shall entrust the advertising to you”, Cicero told him). By the end of the first century BC a more formal way to announce and promote a new book, called the recitatio, had established itself. This was a launch party at which a book (or excerpts from it) were read to an invited audience, either by the author or by a skilled slave known as a lector. Once the reading was over, a presentation copy of the book would be given to the dedicatee, and other less fancy copies would be made available to the author’s friends and associates. The work was then considered to have been published, in the sense that it had been formally released by its author for reading, copying and circulation. At that point the book was on its own and would either spread — or not, depending on whether the author had succeeded in generating sufficient buzz.

The sign of a successful book was that booksellers would have copies of it made for sale to the public — something they would only do if they were sure people would buy them. Roman authors, then, wanted their books to be as widely copied by as many people as possible, and ideally wanted copies to end up being put on sale, even though the author himself would not benefit financially. Instead, Roman authors benefited from their books in other ways: they were a way to achieve fame, highlight or strengthen the author’s social connection with an influential patron, get a better job, and generally advance in Roman society. Roman publishing was all about social networking, and Roman books were a form of social media.

Because my new book is about parallels between modern and historical social media, I thought it might be fun to try an experiment. (I was inspired by Robin Sloan, who did something similar for the launch of his book Mr Penumbra’s 24-Hour Bookstore, and who kindly gave me some advice.) My plan is send a few galley copies of “Writing on the Wall” out into the world and invite people to read them, scribble in them, tweet their favourite bits, or whatever. But this is the crucial part: I would then ask them to pass each galley on to a friend who they think might appreciate it, by hand or by post, and tell me where each book is going so I can chart its travels. Of course, it’s possible that people might actually like the book and prefer not to give it up. Rather than using scribes to make copies, I have a simple alternative: I will send everyone who passes on a galley a replacement, which will be signed, until I run out of copies. I have a few dozen sitting in a box, and this seems like an interesting way to distribute them — Roman-style.

Update July 16th: Thanks to everyone who signed up. Entries are now closed.  I’ll draw some names from a virtual hat and send the galleys out in early August.

Update August 19th: The lucky winners have been picked using a mysterious, pseudo-random process involving dodgy Excel macros, and have been informed by e-mail. The galleys go in the post this week!