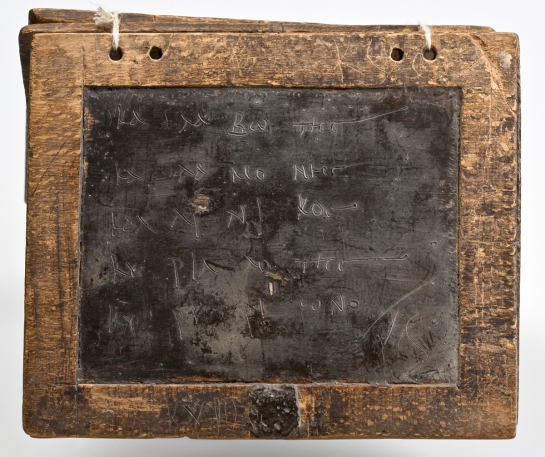 Today a review of “Writing on the Wall” appeared in the New York Times. Which is great, obviously. But almost as exciting (to me, at least) is that the NYT chose to illustrate the review with an image of a Roman wax tablet, taken from the book, and juxtaposed with an image of an iPad. Thus my “Roman iPad” joke, which always gets a laugh when I talk about the book, has reached its largest audience so far.

Yes, the Romans really did have their own version of the iPad. Instead of notebooks they jotted things down on wax tablets of various shapes and sizes, from small ones (the size of an iPhone 4) to big ones (the size of a big iPad, before the iPad Air showed up). The image at the top of this post is a particularly fine example, from the Roman-Germanic Museum in Cologne (to which I am indebted for the picture). It is the size, shape and aspect ratio of a modern iPad. (Note to Google: it’s a 4:3 aspect ratio rather than 16:9, so the Romans are with me when I say that I find 16:9 a bit odd.)

These tablets had a layer of wax inside a wooden frame. You’d use a stylus to scratch things into the wax, and flip the stylus over to use its flat end to smooth the wax and erase things when necessary. That’s why I like to say that the woman in the image below is using the Roman equivalent of a Samsung Galaxy Note 3. As you can see, several tablets were often bound together, like the pages in a book, to increase storage capacity. You can buy a modern replica, if you’re interested in trying this, or make your own.

If you were a wealthy Roman who wanted to read the news over breakfast, you might send a scribe down to the forum to jot down excerpts from the daily gazette, or acta diurna, onto one of these tablets. You could then copy highlights from the news to your friends: the text would be copied onto papyrus rolls and taken to them by messenger. They might then copy those news reports, in turn, to their own friends, adding their own comments or analysis. This is how the Roman social-media system worked.

Because the amount of space on a wax tablet or single sheet of papyrus was limited, the Romans used abbreviations. SPD, short for “SALUTEM PLURINAM DICIT” meant “says many greetings”, for example; if I was writing to someone called Mark I (or my scribe) might write TOM MARCO SPD (Tom, to Mark, says many greetings) at the top. Another abbreviation was used as a sign-off: SVBEEV, short for “SI VALES BENE EST EGO VALEO”, which meant “If you are well, that’s good; I’m well”. It was equivalent to TTFN or GTG today. Alas, there seems not to have been a Roman equivalent of LOL. But the Romans certainly had their own version of the iPad.